Give Out But Don’t Give Up: The Original Memphis 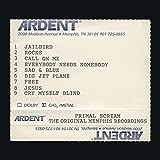 2018 two CD archive release. After the huge success of Screamadelica, in 1993 Primal Scream went to Memphis to make an album with Tom Dowd and the Muscle Shoals rhythm section, which was originally intended to be their ‘country soul’ album, but never saw the light of day. Now, following the recent discovery of these tracks lurking in Andrew Innes’ basement, Primal Scream will release the original studio recordings from Memphis of the tracks that eventually became their 1994 album Give Out But Do

Elvis and the Memphis Mafia

A monumental oral biography filled with raucous joy, aching loss and terrible poignancy, Elvis & the Memphis Mafia is the first book to capture the King – the man and the phenomenon – in his full complexity. Through revealing interviews with three of Elvis’s closest friends, who were also his protectors and rescuers, Nash achieves the first true mapping of Elvis’s psyche.